News
Home | News | Nail Down The Facts About Water Hammer

Water hammer is a serious threat to the overall health and function of a pipeline system. The more you understand it, the easier it is to avoid.

The clunking, thumping and banging sounds of water hammer in a pipeline system are not only annoying, but can very often be a sound that indicates costly repairs in the near future.

When the flow of a fluid is sharply stopped, a pressure wave is produced that travels through pipe systems. When a fluid is flowing in a certain direction it has momentum. When that momentum is suddenly obstructed the fluid will rapidly try to return to its normal condition, causing the fluid to travel back through the pipe and creating a shockwave. These pressure spikes, known as water hammer or hydraulic shock, are common among household plumbing and large industrial treatment plants and can create enormous damage in a very short period of time.

When Does Water Hammer Occur?

On a household scale, this action can be created when running water to a shower, sink, dishwater or anything that causes water to steadily move through plumbing. When the water is shut off abruptly the pressure wave is created. Simply closing the valves slowly can eliminate this shockwave in these scenarios.

On a larger scale like industrial treatment plants or municipal water system, there are a few more things that can contribute to water hammer. In these systems, there are more factors that may reduce the flow of water enough to create a pressure wave. It can result from incorrect valve style or location, or from fluid pumps shutting off too quickly or unexpectedly.

Though the outcomes of water hammer in a pipeline can vary, none of them are good for the system. That loud banging sound associated with this occurrence is the sound of pressurized water slamming into a closed valve, plumbing joint or other blockage, like a fluid pump. Sometimes these forces can create pressure spikes that surpass five to 10 times a system’s working pressure.

Repeated abuse from pressures that high on valves and joints can seriously damage them, causing leaks in joint gaskets, pressure gauges, flowmeters and all other components associated with the pipeline system. It has even been known to crack pipe walls and warp piping supports. Damage like this to any section of a pipeline system can be costly to repair and creates an unanticipated amount of downtime when the system isn’t performing its intended purpose.

In many cases, water hammer is a safety concern. The extreme pressure can instantly blow out gaskets and explode pipes causing immediate danger to any person near the burst.

Eliminating or reducing water hammer starts with proper training. Ensure that operators know the importance of opening and closing shut-off valves slowly. Beyond that, making sure that the proper valves are in the correct locations throughout the pipeline system is the best way to reduce the potential for operator error.

Can Water Hammer Be Calculated?

For the most part, water hammer can be calculated. However, there are many factors that play a role in determining the severity of the surge within a pipeline. Special considerations should be made to valve system applications with booster pump systems, water plants with a number of manifold pumps, long transmission lines, water well applications or hot-water closed systems.

For a quick and easy way to determine an approximate value, you can use a simple rule of thumb that for every 1 foot/second flow velocity change, you generate 54 psi of pressure surge above the normal system pressure in the pipeline.

For example, if you have a flow velocity of 10 feet/second and suddenly the water pump loses power, you will generate 540 psi of surge pressure above normal system pressure. If normal operating pressure was 100 psi, the surge pressure would be roughly 640 psi.

In systems with larger pumps a more accurate calculation should be done like in the example below. The images show how surge pressure waves are generated based on the closing speed of a valve based on an example using 1,000 feet of transmission pipeline. When closing the valve in 1/2 second, 1,450 psi is generated compared to closing the valve in 10 seconds when only a 130 psi surge is produced. 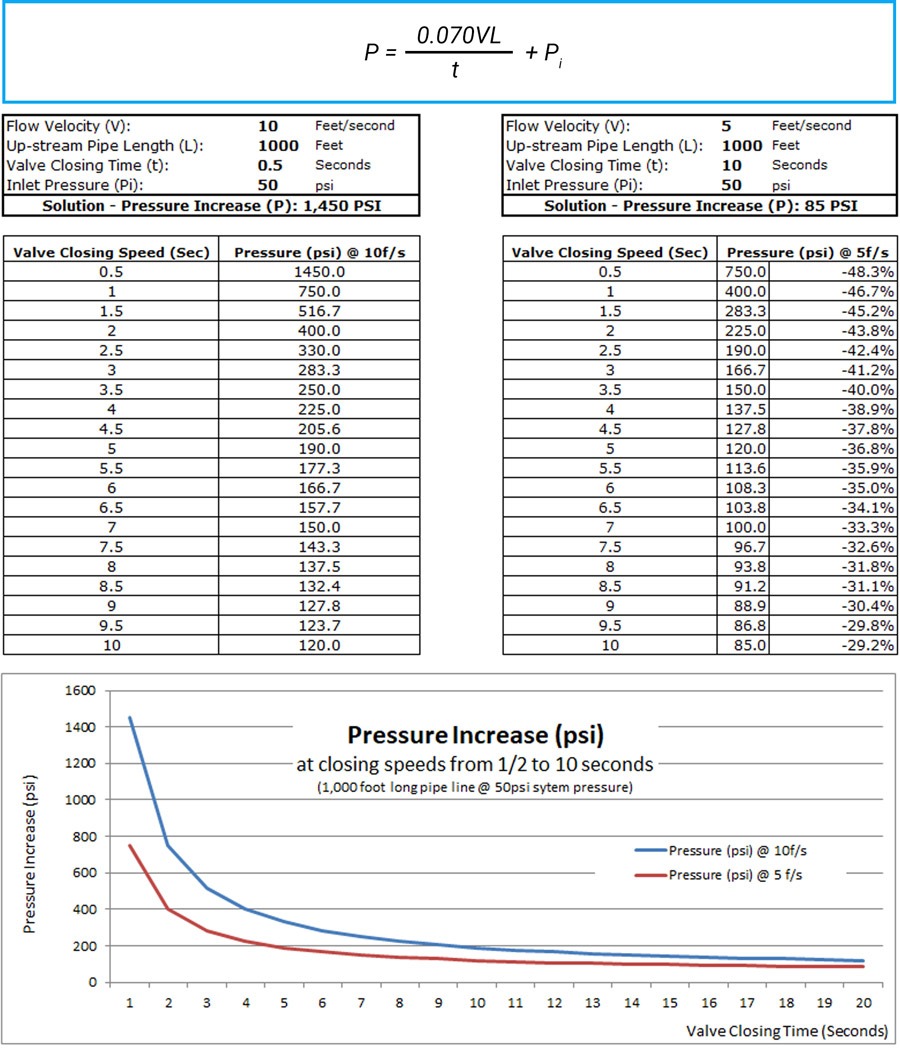 To help understand the amount of time that should be used when closing a valve to avoid critical damage, use the following equation provided below.

It’s All About the Valves

Certain check valve styles are more susceptible to water hammer problems at higher flow velocities, like swing check valves and double door check valves that close very slowly without assisted closing functions to regulate closing time. While wafer style check valves and tilted disc check valves have controlled valve closing speeds for higher flow velocities and pressures. Any check valve that relies on backflow to close fully is at higher risk for creating a hydraulic shock, and when discs are pushed back onto the seat with too much force, it can damage the seal or change the alignment of the disc in seat causing leaking and failure. A resilient seated swing check valve with a field adjustable spring assisted closure, like Flomatic’s Model 745ASC, should be considered, when there is a high risk of water hammer. This valve design was designed specifically to minimize the effects of water hammer.

The globe style silent check valve from Flomatic Series 402BTR is a great choice over almost all types of swing style valves in systems where water hammer is probable, as it is specifically engineered to reduce water hammer while preventing flow reversal. Silent check valves are internally spring loaded designed to close before reversal flow as the differential pressure decreases instead of closing from reverse flow. By closing due to a pressure decrease, it extremely unlikely that it will slam shut provoking water hammer. Hence the name “silent” check valve.

Globe style silent check valves get their name from their spherical valve body shape. The bulbous form is designed to allow less restrictive flow as fluid passes around the internal components of the valve. These silent check valves consist of two halves that are separated by an internal baffle. In an automated silent check valve, as fluid flows through, the pressure from the flow pushes the baffle off its seat, allowing it to pass through the valve. The baffle will slide along a smooth stem that is spring-loaded so it can reset back onto the seat as pressure drops and before fluid stops flowing. With a properly engineered valve with the correct spring tension in place, the valve closure starts as soon as the flow velocity drops, greatly reducing the chances of water hammer

When pumping fluid into a tank through a short distance, check valves need to close very fast. In these situations, use the equation provided in the example below to determine the maximum surge pressure that will be generated and use that to choose the correct style check valve.

With the given example, it is best to use a wafer style check valve Flomatic Series 888 with a cracking pressure (opening pressure) of about 2 psi which will make the valve close faster. Wafer style silent check valves operate very similarly to globe style check valves but are smaller in overall dimension. They do not have the bulbous shape ( except for Flomatic’s new patented Model 888VFD) , so they will impede flow slightly more than a globe style and have a slightly higher pressure drop. They are advantageous for fitting into tighter locations between two companion flanges where a flanged globe valve will not fit. This type fast closing valves are recommended for booster system in high rise buildings etc.

Flomatic also makes an automatic hydraulic check valve for ultimate control in opening and closing speeds to reduce pressure surges and ensure smooth operation. When the upstream (inlet) pressure is greater than the downstream (outlet) pressure, the valve moves to the open position at a controlled speed by exhausting control water from the valves upper diaphragm area to the downstream side through an adjustable needle valve. When the upstream pressure becomes less than the downstream pressure, the valve closes to prevent reverse flow at a controlled speed by introducing control water above the diaphragm from the downstream side through a second adjustable needle valve. This type valve slow closing valves is recommend for longer pipe transmission lines.

There are options available to reduce or stop water hammer in your system. It’s never too early to think about water hammer in a pipeline system, and it’s never too late. Properly engineered systems should take it into account in the design phase and implement components and practices throughout building and operation to reduce water hammer as much as possible. Consult experts like Flomatic that have experience choosing the right valves and where to place them throughout the design process and during renovations. Simple valve replacements may be all it takes to get rid of the annoying sounds and safety hazards of water hammer.